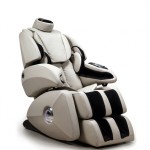 Today I am going to focus on the IT-8200 and the Osaki OS-7000. This will be a 2-part article. Currently, these two chairs have fast become two of our 3 top sellers, behind the Inada Sogno  Dreamwave. I have been getting plenty of calls and emails lately asking me about the difference between the two. With instant discounts on our site, the prices of the two are only $300 apart. What are the similarities and differences between these two models? Is the price difference justified? Well, let's talk about these two models...

1. Design - The IT-8200 is another in a long line of Inada Sogno look-a-likes. The Sogno introduced the streamlined, modern look back in 2008 and that design is now pretty standard for at least one model in each of the other massage chair companies. The OS-7000 has a new look. It seems even more modern still and has been an attraction for shoppers. The OS-7000 is a big chair, the biggest we carry, whereas the IT-8200 is smaller, even smaller than it's template, the Inada Sogno. 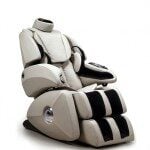 3. Neck Airbags - The IT-8200 has an interesting feature that I've not seen before on a massage chair and that is a neck pillow that has airbags that turn the head from side to side in a gently undulating motion. It is quite relaxing and can even bring you close to sleep.

4. Headband Airbags - Even though the Osaki OS-7000 does not have the neck airbags that the IT-8200 has, it has another feature that is very unique, never before seen in a massage chair. And, that is the headband airbags. This headband has airbags that inflate around the circumference of the skull massaging scalp muscles that can contribute to headaches. It also has airbags and 2 hard nodules at the bottom back of the headband that are designed to massage into the sub-occipital muscles.  That is just a fancy term to describe the muscles under the back of the skull that are usually tender when you have a "stress" headache. I like this feature a lot.

5. Foot Rollers - We only carry two models that have foot rollers; the Omega Montage Pro and the IT-8200. It is a pretty cool feature and, if you've never experienced it before, you will really love it. Most massage chairs have airbags that push down on the feet onto a rubber plate with nodules sticking out of it. The IT-8200 has that also but it has the mechanical foot rollers that are working the soles of your feet at the same time as the airbags are compressing down. Double the pleasure!! 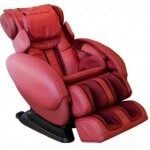 6. Zero Gravity - Both chairs have the zero gravity feature, although the IT-8200 reclines further down. This 178 degree recline angle comes close to mimicking the inversion feature of it's sister chair, the IT-9800. The zero-gravity (along with the inversion of the IT-8200) is a very feature especially for low back pain sufferers.