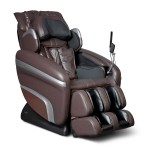 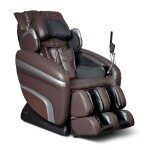 Over the last two weekends I have had visitors come from out of town and spend hours at the showroom. After extensively testing almost every one of our 14 floor models, both parties settled on the Osaki OS-7200H as the lower cost alternative to the Inada Sogno (which everyone wants, but not everyone can afford)! I was quite surprised that both folks picked the OS-7200H...not because it is not a good chair, but only because online the most popular sellers are the OS-7075R and the IT-8500. Now, I have seen two OS-7200H sales after all other models, including the Inada Sogno and Panasonic MA70, were tested.

1. Intensity adjustment of the rollers.
The OS-7075R has one intensity setting of the rollers and that setting is very vigorous. Some folks don't like that. They want the ability to adjust the intensity so that they and their loved ones can feel comfortable in the chair.  Not everyone is the same as far as sensitivity to roller intensity goes. Some want less intense, some want more. The OS-7200H offers that flexibility with it's 3D massage rollers. UPDATE: The 7200H does not have a true 3D intensity adjustment feature. The OS-3D Pro Dreamer is essentially the old 7200H with foot rollers, 3D roller massage, and the new dome at the top of the chair back.

2. Airbags
The OS-7200H actually has more airbags than the  OS-7075R. You would think that with the larger size and features like the headband airbag massage the OS-7075R would have more airbags. But the airbag count is 51 to 46 in favor of the OS-7200H.  I think the extra airbags in the body of the chair contributes to a more comfortable fit for the customer. It seems as though the 7200H gets better feedback from customers about how it fits the body.

3. The feel of the rollers is different in both chairs.
Although both chairs are from Osaki, you can tell that they have a different roller system in each chair. I spoke to the differences in the rollers of both chairs, particularly in the area between the shoulder blades, in this article... http://www.massage-chair-relief.com/blog/chair-models/osaki-os-7000-vs-osaki-os-7200-between-the-shoulder-blades/

4. Music System.
Although this feature is not a game-breaker, since it doesn't add too much musculo-skeletal therapeutic value, it is a nice thing to have just for the relaxation value. Just plug in your phone or mp3 player and listen to your favorite tunes while getting your massage.

5. Shoulder Airbags.
The OS-7200H has taken a cue from the Inada Sogno and tried to replicate the Sogno's Cervical Traction Device. The 7200H has a headpiece with airbags that inflate and compress down onto the trapezia muscles on the top of the shoulders. It is a very nice feature to have, especially if you suffer from tight shoulders. It is not as refined a massage of the traps as is that of the Sogno, but it is a nice feature nonetheless.

6. Lower Failure Rate.
As of the time of this writing, the OS-7075R is experiencing more breakdowns than the OS-7200H. If you are concerned about the Chinese workmanship in these chairs, the OS-7200H, for the time being, is a safer bet for a lower failure rate.

7. Lower Price.
The OS-7200H is priced a few hundred dollars less than the OS-7075R. Of course, prices change all the time, but for now the OS-7200H is a little lighter on the pocketbook.

The OS-7200H has a longer default massage time. That just gives you more time to fall asleep without having to start the chair program over again!