I just received notice yesterday of a new model coming from the Infinite Therapeutics folks. It will be called the Infinity IT-8500 and looks to be an upgraded version of the IT-82oo. The IT-8200 has been a very popular model in the short time it’s been on the market. I suspect that this new model will capitalize on the popularity of it’s predecessor.

It will be priced at $3995 (we will be offering a $300 instant discount on this model when you purchase this chair on our site) and has the following features distinguishing it from the IT-8200:

1. Spinal Correction – I have no idea what that is. If it is anything like the Inada Doctor’s Choice 3a or the Osaki OS-7000 models, it will come with anterior shoulder airbags that pull the shoulders back whilst the rollers are going up and down your back.

2. Accu-Roll Shoulder Massage – Again, no idea what this is.

3. Tru-Grip V Stretch – The IT-8200 does not have a true spinal stretch program, so I suspect that this model will introduce that feature.

5. Intersound Technology – No idea what that is, but will report on it once I learn.

6. Colors – It will have the same colors as the IT-8200 but with an additional Ivory model.

Speaking of the IT-8200 model, we delivered and assembled our first local IT-8200 chair. I videotaped the proceedings for your perusal on YouTube (not up yet, but should be once it is edited in the next couple of weeks). I was interested to see that the chair came in not one box, not two boxes, but three boxes. One box had the body, another had the ottoman, and the third had the arm rests. It was relatively simple to assemble, our biggest issue being pinched air hoses when we were done. But, that is easily remedied. 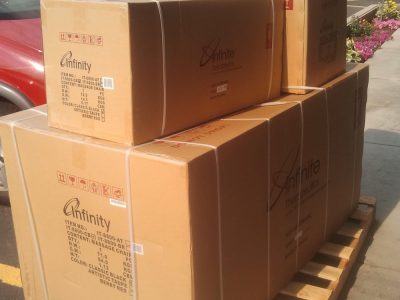 The IT-8200 Berry Red color has been discontinued and a Chocolate Brown will take it’s place in mid-September.