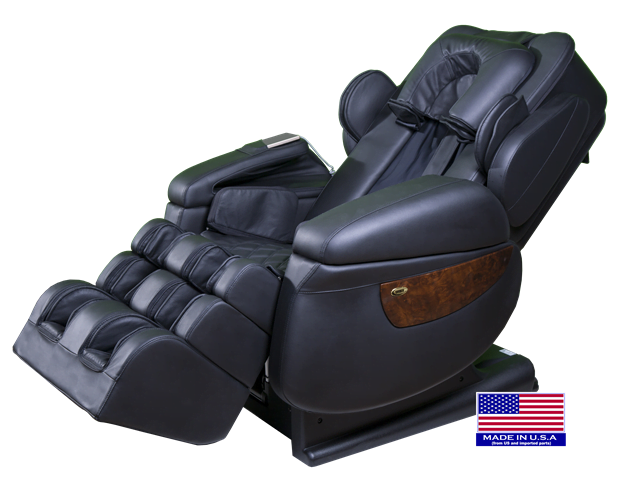 Alan: Hi, I’m Dr. Alan Weidner from ‘Massage-Chair-Relief.com‘ and I want to talk a little bit about the Luraco iRobotics 7 Plus.

Alan: On September 1st, 2018, Luraco discontinued their very, very popular iRobotics 7 Plus, and they introduced the new – or sorry, the iRobotics 7 – and they introduced the new iRobotics 7 Plus, and they’ve made a few changes. The price has changed, about $500 up, but the changes in the chair might just justify that for you. For those of you that have the old iRobotics 7, you can even get a conversion kit for the changes, to upgrade your iRobotics 7 to the new iRobotics 7 Plus, but I’m going to go over those changes with you today. The first thing we’ll start with – by the way, the chair looks exactly the same, it functions exactly the same, most of it is – you wouldn’t even really know the difference until now. I’m going to explain the differences to you, and then you’ll realize that there are some differences, but it’s not much. Most of it’s in the programming, some of the hardware, and some of the additional features on the remote control. But let’s start with the exterior, we’ll look at the speakers on the back. The chair – and the iRobotics 7 had a notoriously bad speaker, I think it only had one speaker, and it was back here, it was very poor-quality sound – oh sorry. The voice-response system on the chair, so when, you know, when you turn it on, there’s a voice that’ll start talking to you and telling you what’s going on during your massage, which you can shut off, but it was a very tinny, staticky sound.

Alan: It was not good at all, and then you, the remote control, on the old iRobotics 7, had a slot for an SD card, and you could download music to your SD card, and then stick the SD card in there, and play your music on the chair, but the quality was bad, and Bluetooth nowadays is the big thing. Well, this chair now has Bluetooth connectivity. So, you can actually pair your phone or your tablet, or your device to the chair, and you can play your music off of your phone. So, that is kind of a nice new feature that this chair has. Now, the rest of the features that I’m going to talk about, for the most part, are on the remote control. The remote control itself looks the same, but it’s got a little bit of a different feel now. It’s a little bit of a sturdier massage, not massage, a little bit sturdier remote control, the feel of it’s a little bit better. It feels like a little bit better quality. It’s still like an iPhone kind of interface, or a smartphone kind of interface, where you’ve got icons where you can push, and change the program to whatever program you want. But the speed with which these programs change has become a lot quicker, and it’s fantastic. It has a pause button now, so you can stop the program in the middle of your program. That will not work until the body scan is completed on whatever program you start with. But it does have a pause button, so let’s say you have to go to the restroom, or go get some food, or answer the door, or whatever, you can push your button, the pause button, and jump out of the chair, and then when you’re done, come back and push it again to play, and that way you can, you don’t have to start over with the scan again.

Alan: Also, the chair has added, in the manual mode, the chair has added some kneading, or sorry, some tapping, and percussive modality. So, before, on the iRobotics 7, it was mostly kneading, a slow, methodical knead, but you could add, in the manual settings, you could add a little tapping, right, tapping. So, now, they’ve offered a couple of other options for tapping. Some different rhythms, and variable tapping speeds, so it kind of adds a little bit more, I don’t know, a little bit more variety to the massage experience on the iRobotics 7. And I just want to make sure I’ve covered everything, yeah, that’s about it. So, those are the changes, those are the main changes, and the price now on this one is $8990. The old iRobotics 7 is $8490, great quality chair, American built with imported non-critical components from Taiwan. It is one of the few chairs that does not have any Chinese components at all, mainland Chinese. So, anyway, that is the iRobotics 7 Plus differences from the old iRobotics 7, great chair still, functionality’s still the same, rollers are still the same, motor’s still the same, same kind of airbag feel as before, but now with these added features and benefits.

Alan: So, I hope you found this video helpful. If you did, please feel free to thumbs up ‘Like’ us on our YouTube channel, and of course, help us spread the word about massage chairs by sharing this video on your social media platforms, whether it’s Facebook, Instagram, Twitter, Google Plus, LinkedIn, whatnot. There’s tons of opportunities and formats for you to share this video. We just appreciate it, and then we look forward to seeing you on the next video. Bye bye.

Click on the following link to watch this Luraco iRobotics 7 Plus massage chair tutorial on our YouTube channel.