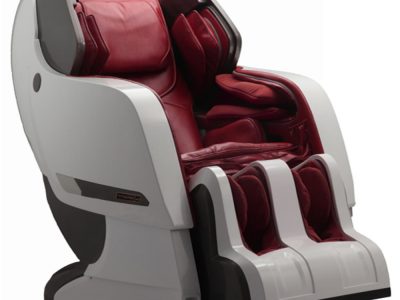 I must say that the first thing that struck us when we opened the boxes is the “coolness” of the exterior of the chair. The white molded body is really very contemporary looking and really sticks out in our showroom (filled with a lot of black and dark brown massage chairs!). The young men who do my assemblies and deliveries thought it was the “coolest” chair they had seen (take that for whatever it is worth).

The assembly was a pleasant surprise. The chair comes in 3 boxes, one with the arm rests, one with the ottoman, and one with the chair body. That is pretty typical of the Infinity chairs. The thing that was nice about the assembly is the fact that each of the air hoses and electrical cords plugged into receptacles that were anchored into the body of the chair. That made is very easy to find where each one plugged in to. It really took no time at all to put this chair together. If you are contemplating White Glove Delivery when you order this chair, I must say that it is not nearly as difficult to put together as some other Infinity and Osaki chairs.

Now here is a list of other points that I noticed during my two hour “test drive” of this new and very interesting massage chair:

1. The thing I was most excited to experience in the new Iyashi was the innovative 49″ roller track….the first of it’s kind marketed broadly in the US market. I was not disappointed!! I loved it. It is a good, vigorous massage that hits the buttock muscles as well as the back part of the thighs. I originally expected it to run further down the thighs toward the knees, but to the proximal part of the thighs it went. But, no worries…it feels fabulous. It is a vigorous massage and you will really like how it hits the glut muscles.

I would suggest being constantly aware of how far back your low back is pressed against the chair back. Because of the movement that occurs incidental to the buttock rollers, your butt tends to slide forward on the seat, thus diminishing the amount of massage you get on the buttock muscles and, more noticeably, the back of the thighs. I found myself having to consciously move my butt back against the chair back to get the most out of the rollers in that area. Not a big deal at all…just a tip for a more thorough and effective buttock and thigh massage.

By the way, in my notes, which I was taking during my chair experience, I noticed that I wrote two times “butt rollers are fantastic.” I must have really liked them to have mentioned that twice, verbatim!

3. The sliding base of the chair is pretty cool. When you turn on the chair and choose a program, the first thing the chair does is slide forward about 12″ to pull the chair away from the wall. It kinda feels like you are on a launch pad and the rocket is being moved into position for lift off. The great thing about this feature is that you can put your chair right up against a wall without worrying about the chair back hitting the wall during the recline. Pretty neat and extremely space-efficient.

4. The mechanical foot rollers were quite interesting. First of all, your feet are put into a foot “housing” which obscures most of your foot. It looks like a shell to protect the foot. But, the mechanical rollers themselves were quite vigorous and even seemed to change direction during one of the programs that I was using.

Another thing I noticed about the feet, which I’ve not seen in the other IT chairs, is the shearing motion of the foot airbags that moved my feet over the rollers while they were doing their thing. This made for a much more intense foot massage experience. Some may find it too vigorous and, if so, you can turn off that feature from the remote control.

6. The remote control is wonderfully simple and intuitive. One of the problems with a lot of massage chair remote controls is how hard it is to become comfortable and familiar using the remote. This showroom model did not come with an Owner’s Manual, but it was so easy to use the remote that I haven’t had to use it  yet. It is a push button “menu” remote with everything programmed into the digital display. It felt more like a TV remote to me than a typical massage chair remote. I loved it’s simplicity and ease-of-use. I think you will too. Very intuitive and easy to use. The number of buttons on the remote are minimal.

The remote also has a small pouch inside the right armrest into which the remote can be put. The cord and remote are fully obscured from view when put in the pouch.

7. The seat cushion does not shift from side-to-side like it does on the IT-8500/8200 models. Rather it uses the hip (lateral thigh) airbags to push your seat from side to side over the roller track. It seems to have a similar effect, but rather than have the seat move relative to the hips, it moves the hips relative to the seat. I can see why they had to do this, as the roller track in the seat most likely needs to be stationary and immovable.

10. The arm airbags are covered in a material that has little rubber-like nodules on the exterior of the material. I originally thought they were just there for aesthetics, but later began to wonder if they were there to help keep the arms in place whilst the airbags inflated upon the forearms. You see, some chairs tend to squeeze your arms right out of the arm airbags, so I wonder if that is the purpose of the nodules. It looks cool, but could it be meant for more?

11. The chair has some alternating chromotherapeutic lights on the outside of the chair body.

12. When the rollers hit the neck region, I was pleasantly surprised at how the rollers seemed to move a bit forward over the top of the shoulders, ala the Panasonic MA70, but was a little disappointed in how it worked my neck muscles. Just like when I sat on the Panasonic MA70 and had to tuck my chin in a bit and consciously push my neck against the chair back to get the full benefit of the rollers in that region, I found myself doing the same on the Iyashi.

I love the neck massage of the IT-8500/8200 models, and had hoped that this would be the same, but found it to be lacking a little bit in that area. It just feels like the rollers don’t move forward enough to really hit the muscles in the C-curve of the user. Having said that, I still got a decent neck massage from this chair. But, the butt massage roller track more than makes up for it, in my humble opinion.

13. There are some airbags in the chair back around the mid back region that alternatively inflate, thus inducing a rotation motion in the upper body, relative to the seat. I have seen functions similar to this in other chairs and it is a nice feature to have.

14. I had a fellow, who works in the same building as our showroom, come sit on the chair to give me some objective feedback. He usually comes over and sits on the Osaki OS-7075R. After sitting on the chair, he mentioned to me that the Iyashi caters to his body better than the OS-7075R. What he was saying is that he felt that  the chair fit his body better.

I’ll be returning to the showroom to try out some of the other programs. When I do, I will share my thoughts with you in Part 2 of this article. One of the things I am most curious about trying is the stretch program. I am very interested to see how it feels with the shoulder airbags and the integration of the buttocks and thighs rollers. I will report on that, and any other things I learn about the chair, on my next post.